PREV. ARTICLE
NEXT ARTICLE
HOMEPAGELIFESTYLEGREEK LUXURY BRANDS INSPIRED BY | THE GREEK REVOLUTION OF 1821 |

GREEK LUXURY BRANDS INSPIRED BY | THE GREEK REVOLUTION OF 1821 |

Ancient kallos was created as an alliance that confirms the direct relationship between the fashion aspect and the architectural one. The sun in the form of its ancient Greek symbol features in the logo (ΚΑΛΛΟS), in the letter O, as a representative of the spirit , while the dot in the middle symbolises the original spark, which mainly springs from willpower. Ancient Greek symbols printed on cotton fabrics, designed exclusively for Ancient Kallos, authentic embroideries on shirt dresses, cotton broderie, silk fabrics and handmade tassels are only a few of the amazing details that define Ancient Kallos.

’Fermeli’’ is called the ‘’Evzones’’ Vest with the rich, traditional embroideries.
They revive these handmade works of art through the ‘’Fermeli’’ Blouse. Pay attention to the folded details on the back and the wide characteristic sleeves. Be inspired and dare to match this iconic Blouse with our Spetses Skirt. 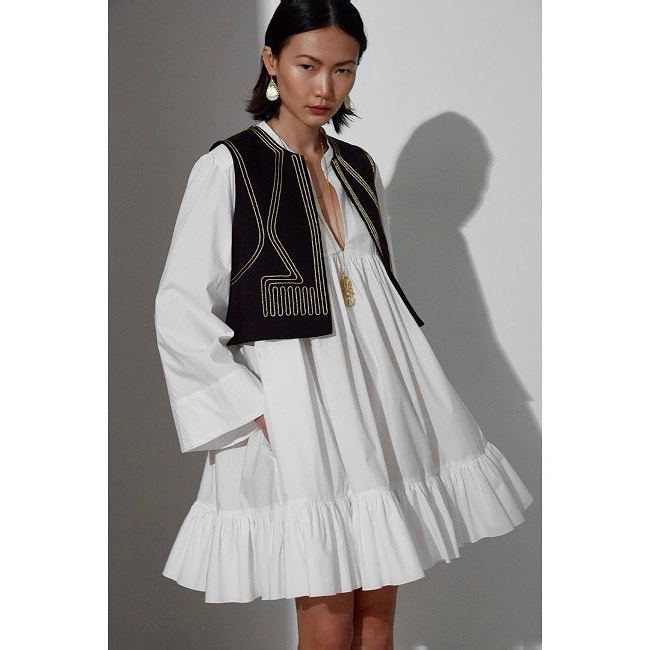 ‘’Fermeli’’ is called the ‘’Evzones’’ Vest with the white and golden embroideries that depict folklore themes. Be inspired and dare to match this significant item to complete your outfit. 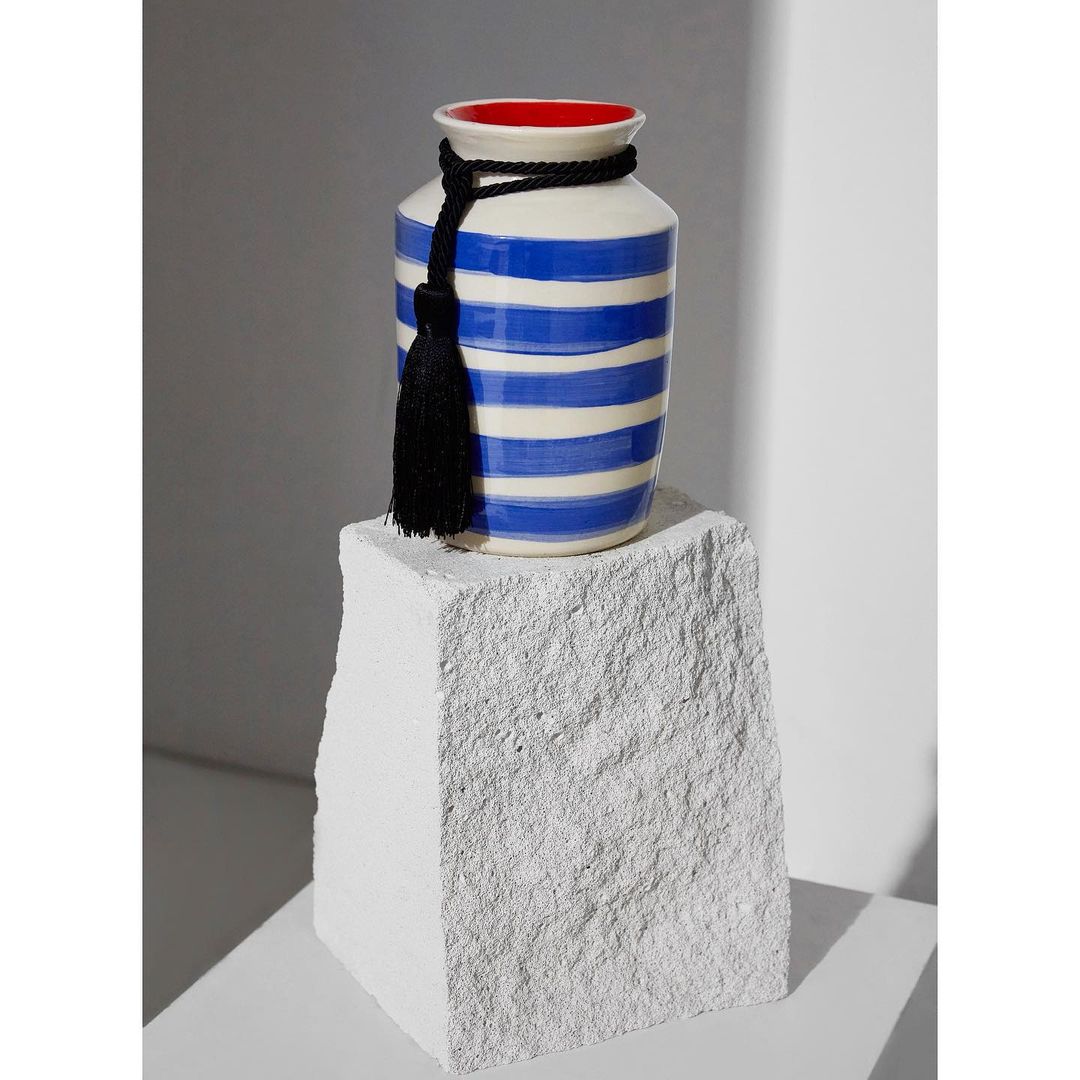 Hellas Vase is locally made in Crete, Hellas, and exclusively designed for Ancient Kallos by the artist @alexandramanousakis

Hellas vase is their very first custom handmade piece from the Greek traditional ceramic Art.
Inspired by the Greek Flag, the five blue stripes represent the letters of the word “Freedom” (Greek – Ελευθερία) Ε-ΛΕΥ-ΘΕ-ΡΙ-Α.
The red splatter detail on the inside symbolizes the bloodshed by the heroes in the struggles of the revolution of 1821.
The white color of the Vase symbolizes the purity of the Greek struggles.
The shape of the characteristic, long, black tassel symbolizes the tear.
Hellas Vase is locally made in Crete, Hellas, and exclusively designed for Ancient Kallos by the artist Alexandra Manousakis.

Callista was originally founded in 2013 to breathe new life into an iconic accessory – the Tote bag. Since then their vision has always been to develop designs that are not affected by seasonality or trends, but rather encapsulate timeless elegance and exceptional quality.

With extraordinary attention to detail and an unrivaled love of leather craftsmanship, each unique design is handmade by skilled craftswomen at their Athens atelier. With the utmost respect for natural materials, each Callista piece is created to be worn season after season, with a distinct beauty that never ages or fades. 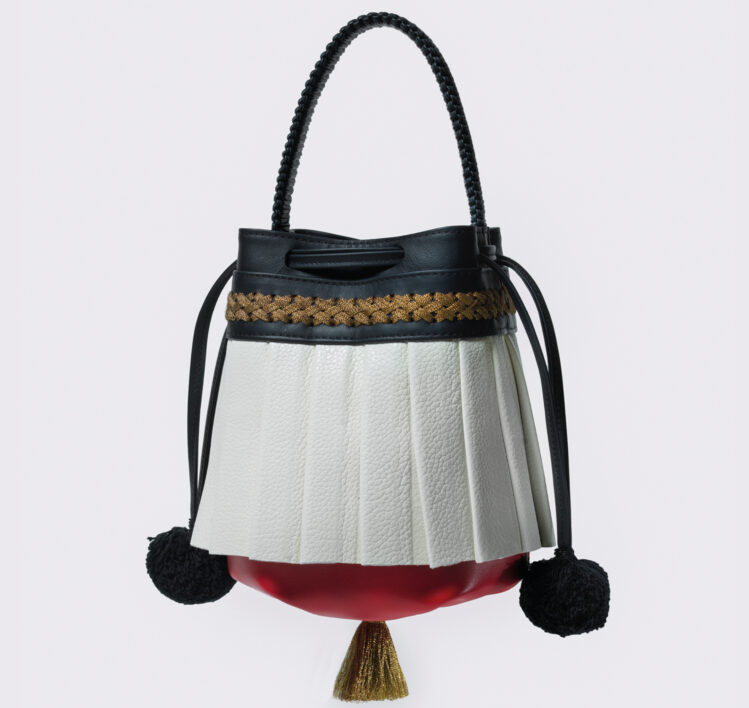 In celebration of the 200th anniversary of the Greek Revolution, our 1821 Pouch is a modern take on the national costume of Greece. Honoring traditional craftsmanship, each Pouch is cut from luxurious leather and is adorned with handcrafted customary Greek details from NE.M.A. Passementerie at the Benaki Museum. 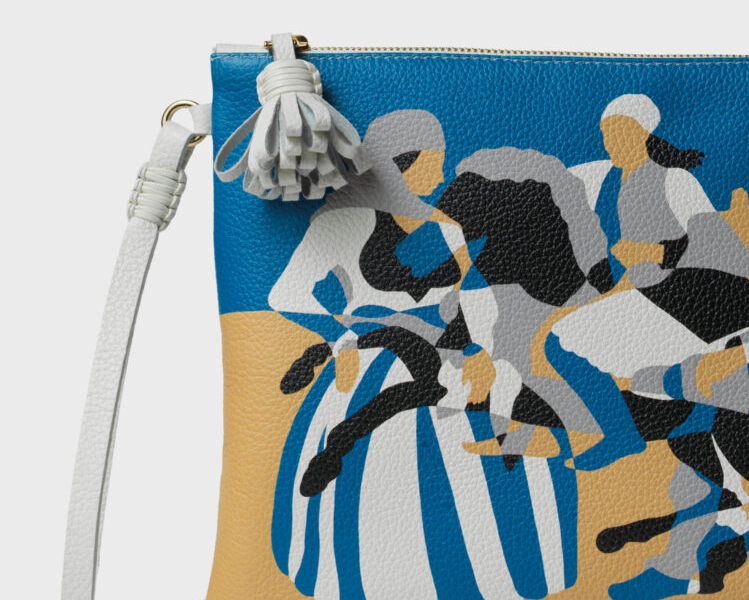 The handmade leather pochette, created in collaboration with Greek street artist, Cacao Rocks in celebration of the 200th year anniversary of the Greek Revolution. Limited edition of 50 pieces only, each piece contains the edition number internally.

The Grecian Chic has two collections one inspired from everyday life and the other from the history and mythology. Both collections feature silk scarves, pocket squares and twillys. The “Classical” derives its source of inspiration from the history, traditions and even mythology! The “Grecian Life” is more whimsical representing everyday life in a comical way. Main character is the Grecian Lady who travels around the islands and mountainous villages to pose next to cult male figures! Visits the biggest European cities and explores them though the eyes of a greek! The Grecian Lady character was originally born in 2007, when Elena Zourtnatzi (the founder) was asked to illustrate the windows of Hermes boutique in Athens and she designed 4 figures dancing. 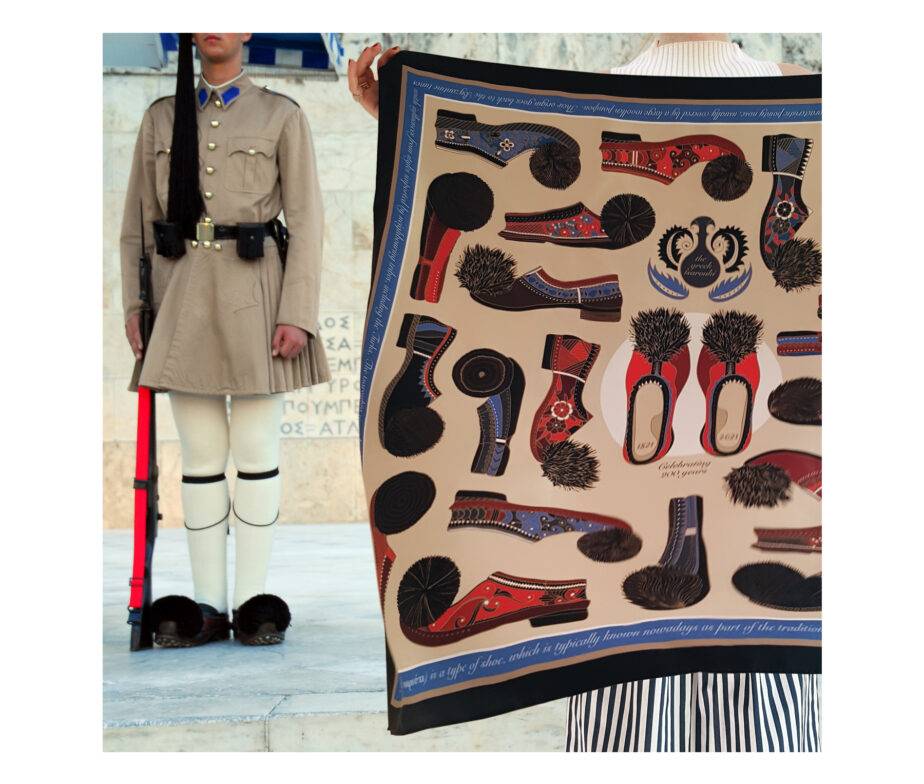 A limited silk scarf, celebrating 200 years from the Greek Revolution, a successful war of independence waged by Greek revolutionaries against the Ottoman Empire in 1821. The scarf features the “Tsarouhia” (Greek: τσαρούχια), the shoes, part of the traditional uniform worn by the Greek guards known as Evzones. 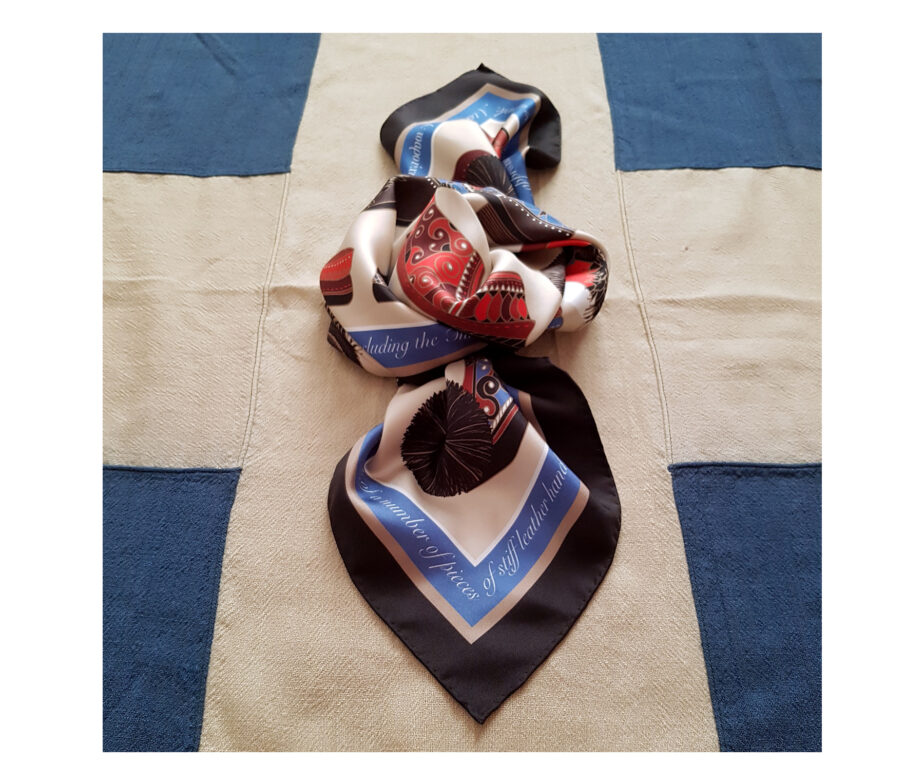 They are typically made of a number of pieces of stiff leather hand-sewn together and have a characteristic pointy nose, usually covered by a large woollen pompon. 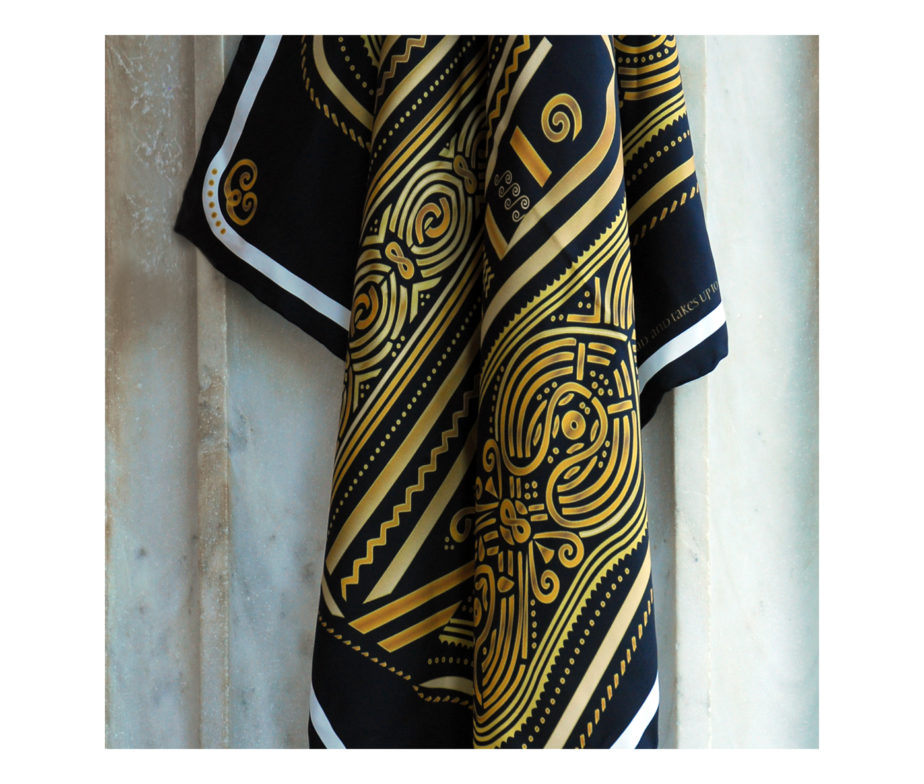 The “Fermeli” silk scarf, based on the waistcoast of the ceremonial uniform of Evzones!

Fermeli
The waistcoast of the ceremonial uniform of the Evzones, soldiers of the Presidential Guard.
A “fermeli” is embroidered with white or gilt thread, and takes up to one month to sew. The yellow stripes (if any)
indicate the military rank of the wearer.

Longer than any other twilly! “Tsarouhia” twilly can be wrapped round your waist

With a rich heritage rooted in mythology and symbolism, Zeus+Dione transcends classical notions of style and design.
Named after the parents of the ancient Greek Goddess of love, beauty and eternal youth, the brand is characterized
by a unique interpretation of myth and tradition. While various aspects of ancient culture affect the design of each new collection,
the Greek letter, Delta Δ, is a predominant undertone of the brand, alluding to spirituality, harmony and creativity.

Beyond symbolism, Zeus+Dione’s lifestyle collections are influenced by minimal structures, geometry and precision,
all of which are elements prevalent in classical Greek architecture & design. The inspiration drawn from doric elements
are the clean lines embellished with intricate details and elegant patterns stemming from geometric shapes. 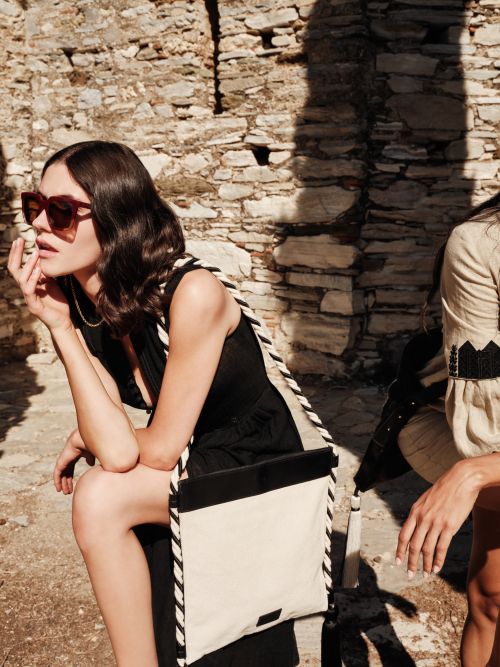 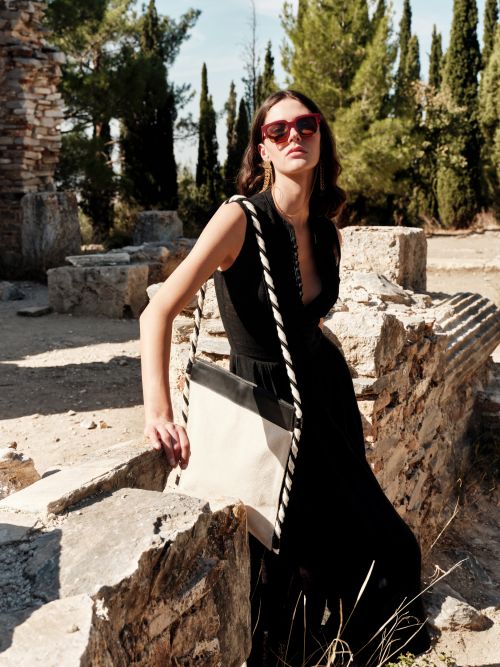 The year 1821 marked a turning point in the story of modern Greece. It is the year when, after centuries of Ottoman rule, a rebellion erupted that subsequently led to the establishment of the country the way we know it now. To commemorate the 200-year anniversary of the historic event, this spring/summer 2021 collection takes the revolutionary heroes and heroines that paved the way for independence as its starting point. For Zeus&Dione, 1821 was, and more importantly is, about new beginnings. 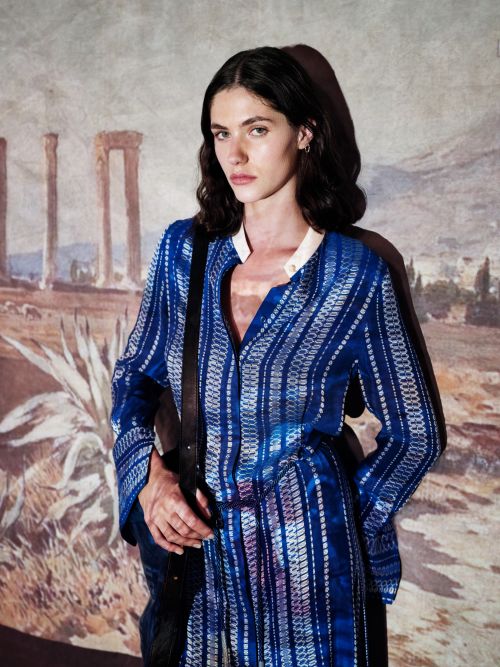 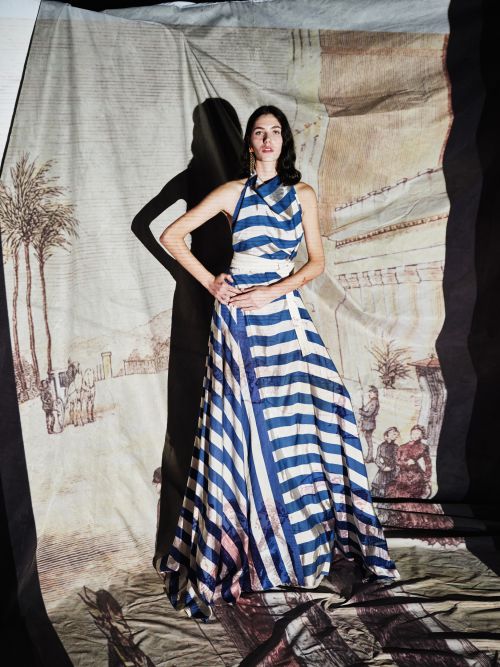 Greek blues dominate the colour palette along with carmine, auburn-red, cypress green, sand, ecru and off-white. The Zeus&Dione signature spathoto silk comes in a combination of blue and cyan, taking its cues from the original colour of the Greek flag along with its contemporary counterpart. Deconstructed stripes of the HELLAS top and dress pay homage to the flag also. 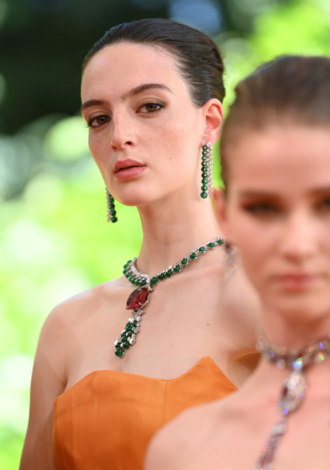 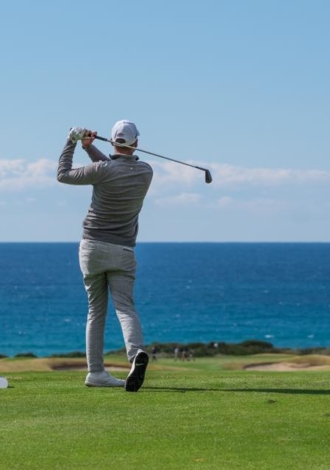 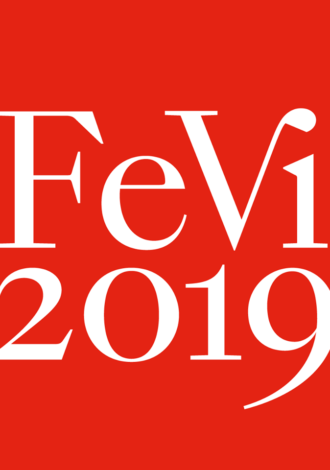