Van Cleef & Arpels has always been inspired by the unique creative energy of love, for it was love which brought the Maison into being.

Towards the end of the 19th century, a young girl named Estelle Arpels – the daughter of a dealer in precious stones – met a boy named Alfred Van Cleef, the son of a stone-cutter. It was the beginning of a love story like no other, a great adventure beyond expectation.

In 1895, they were married. The young lovers had much in common: youthful enthusiasm, a pioneering spirit, an ethic of family solidarity, and a passion for precious stones.

But above all, they were inspired by the desire to create something lasting together. That desire led them to found the Maison of Van Cleef & Arpels. In 1906, Alfred set up in business with Estelle’s brother Charles, a talented salesman who managed their new boutique in Paris’ Place Vendôme. Two years later, Estelle’s brother Julien joined the firm; they were joined in 1912 by her third brother, Louis.

Over the years that followed, they succeeded in making Van Cleef & Arpels synonymous with the most exquisite jewelry in the world. With that achievement, the love which first brought Estelle and Alfred together lives on to this day through the many enchanting love stories of the Maison.

In 1906, Van Cleef & Arpels was among the first jewelers to settle in Place Vendome, a square designed by Mansart in the 18th century. On June 16, the original boutique was inaugurated at 22 place Vendome in an exeptional location: directly opposite the Ritz. The sumptuous Hotel Ritz had opened in 1896 and attracted Russian and European aristocrats, along with American magnates of business and industry. Place Vendome became a symbol of Parisian luxury and the new benchmark for international elegance.

In 2006, the boutique was completely redesigned by Patrick Jouin with a decor which combines Art Deco roses with 18th century-style wood panelling. It thus maintains the mixture of simple elegance and dynamic creativity that has always defined the Maison.

In 2011, Van Cleef & Arpels claimed an enduring place in th world of Haute Horlogerie. The Boutique “Le Temps Poetique” is a new setting dedicated to the Maison’s timepiece collections, which are talented illustrations of its savoir-faire and its original creative approach. The interior design is in the same spirit as the High Jewelry areas.

Ever since 1906, special orders with Van Cleef & Arpels have provided clients with the possibility of sharing in the emotion of the creative process and bringing unique pieces of jewelry to life.

Dietrich made the Jarretière bracelet a part of her life and was often photographed with the dazzling bangle on her wrist. She can be seen wearing it in Alfred Hitchcock’s Stage Fright, shot in London in 1950. According to family tradition, it was the only piece of jewelry with which she was reluctant to part. It was finally sold for $990,000 at Sotheby’s shortly before her death in 1992. This bracelet is now part of an anonymous private collection.

It all started in 1966, when Pierre Arpels learned that out of the fifty proposals for the design of the imperial crown submitted by the greatest jewelers of the time, the Iranian government had chosen a Van Cleef & Arpels’ drawing. The crown would be adorned with jewels from the National Treasury located in the Central Bank of Iran, according to Iranian tradition.

Unable to bring the priceless jewels back to Paris, Pierre Arpels spent days in the Central Bank’s basement passionately selecting each stone that would adorn the imperial crown. With the help of his foreman and designer, he set up a complete workshop in the National Treasury room to achieve, in 6 months and under high security, this historic special order.

In 2011, Van Cleef & Arpels had the rare honor of being chosen by a royal bride to create a set of jewelry. The Océan necklace is a tribute to the grace and elegance of Her Royal Serene Princess Charlene of Monaco, who gave the piece its name. This necklace, a token of love offered by the Prince to his Princess, can be transformed into a tiara.

Formerly in the Collection of Her Highness the Begum Aga Khan, the Indian necklace is a remarkable example of the transformability of Van Cleef & Arpels’ creations, as it truly shows that metamorphosis can happen through the simple opening of a clasp.

The remarkable tiara is adorned with 54 pear-shaped diamonds weighing 92 carats and 530 baguette-cut diamonds weighing 72 carats. The unique two-strand necklace in round and baguette cut diamonds, along with the earrings and tiara, were worn by th ePrincess on many occasions. She became a fervent admirer of Van Cleef & Arpels’ jewelry and never missed an opportunity to visit their boutiwue on Place Vendome.

Nicknamed “The Indian Wallis Simpson”, the Maharani of Baroda – wife of the Maharaja of Baroda – had an insatiable passion for jewelry and a fabulous collection of over 300 pieces stretching back to the Mughal era. The Maharani particularly enjoyed having gems from her husband’s Crown Jewels converted into contemporary designs. A seasoned international traveler, she would stay at the Paris Ritz and then cross the Place Vendôme to the Van Cleef & Arpels boutique, accompanied by servants bearing boxes of precious stones. Of these, perhaps none was more spectacular than the Baroda necklace, also known as the Lotus necklace or the Hindu necklace, which she ordered in 1950. It consists of 13 pear-shaped Colombian emeralds – weighing a total of 154.70 carats – suspended from a lotus flower set with pavé-set diamonds. The body of the necklace sparkles with dozens more emeralds and diamonds. Most remarkably, the gems were all supplied by the Maharani and belonged to the Baroda Crown Jewels.

One of Van Cleef & Arpels’ most exquisite special orders is a delicate flying bird carrying a 95-carat pear-shaped yellow diamond. In the 1930s, this unique gem belonged to the opera singer and socialite Ganna Walska, who wore it as a pendant. This remarkable diamond appeared at a Sotheby auction in 1971: one year later it adorned the cover of a Van Cleef & Arpels’ catalogue, flying over the mythical Place Vendôme in the beak of a bird. Its new owner had asked the Maison to combine this exceptional stone with a bird of yellow gold, emeralds, and sapphires in celebration of the birth of her son in 1972.

The School of Jewelry Arts

Van Cleef & Arpels has created a school to cast a light on the secrets of the world of jewelry. Open to amateurs, connoisseurs and professionals, L’École offers an “à la carte” program of courses and lectures, every month in French and English. Each course is given to a group of maximum twelve students and lasts from two to four hours. Lectures, in the evening, can welcome up to seventy persons.

Located on the iconic place Vendôme, L’École offers a gemology workshop where you can manipulate stones, jewelry workshops to experience gestures, a design studio to learn the techniques of gouache, two classrooms devoted to the teaching of Art History of Jewelry, a conference room and a library of over 400 specialized and rare books.

In accordance with its educative mission, L’École has initiated five partnerships – in France and Japan – to confirm its commitment to tradition and innovation of know-how and creation (the Galerie des bijoux of the Musée des Arts Décoratifs, the Muséum National d’Histoire Naturelle, the Université Rennes 2, the École Boulle and the Kyoto University of Art and Design).

Where does the term “Toucher du bois” come from? Where are gems born? Why have feathers been inspiring works of art for hundred years? What is so special about the rubies of the valley of Mogok? The teachers of L’École answer the most frequently asked questions of their students and invite you to learn more about the secrets of the world of jewelry.

Partnership with the École Boulle around the Minaudière

Throughout its history, the Maison has never ceased to express its attachment to the values of creativity, sharing and legacy.

An educational partnership with the École Boulle has been established in 2017, notably on the theme of the Minaudière™, the ingenious vanity case developed by Van Cleef & Arpels in 1933.

In this context, two students have created a prototype of qualitative and refined Minaudière, giving rise to enthusiasm around their project.

This initiative reflects the Maison’s ever-increasing involvement with the younger generation in order to sustain and nurture the High Jewelry crafts and to build their future together. 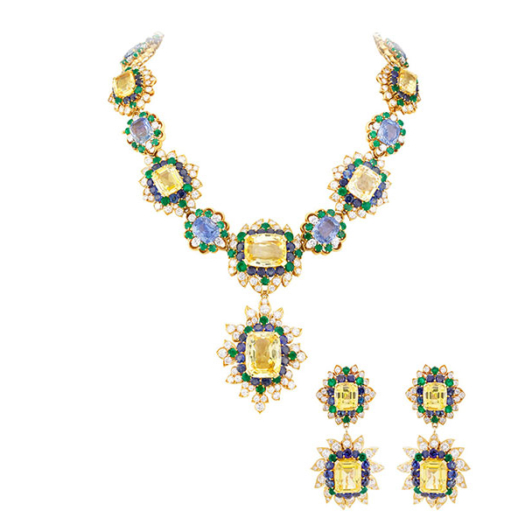 Van-Cleef-Heritage-collection
HERITAGE COLLECTION
For over 10 years, the Maison has been searching out creations produced between the 1920s and the 1980s, offering them up to vintage jewelry collectors from around the world. From the outset, the Héritage collection has brought together several hundred pieces – some extremely rare – tracing the evolution of the Van Cleef & Arpels style over the years. Before being unveiled, each piece is researched in the Maison's archives and ultimately presented with a certificate of authenticity. 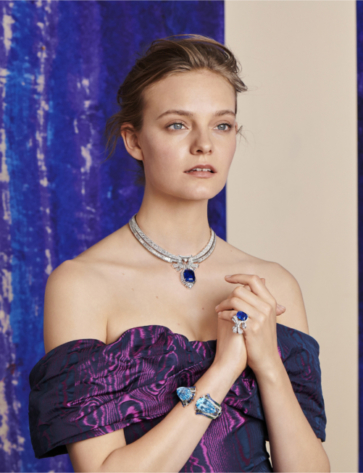 Van-Cleef-Romeo-Juliet
ROMEO & JULIET
William Shakespeare’s legendary masterpiece Romeo and Juliet has inspired Van Cleef & Arpels’ new themed collection, in which the language of love encounters that of gems. The young lovers’ destiny plays out in a Verona of precious stones, in which emerald gardens and flamboyant ramparts shelter their secrets. Imbued with the style of the Italian Renaissance, virtuoso creations translate this eternal passion into High Jewelry.
POWERED BY Van Cleef and Arpels
SHARE THIS
RELATED TAGS
Van Cleef and Arpels (7)
#
ARTICLES ABOUT Van Cleef & Arpels 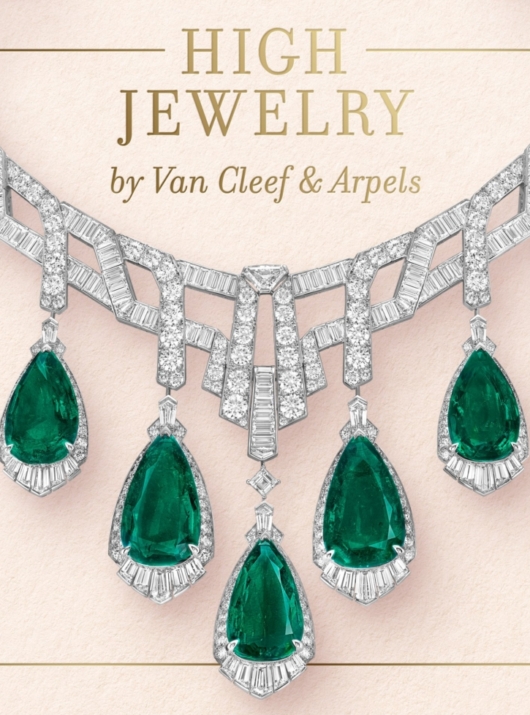 BY LAURA PRIOR |HARPERS BAZAAR ARABIA| Van Cleef & Arpels, the French high jewellery maison internationally renowned for its enchanting creations, has proudly announced the opening of its first ever heritage exhibition in the Middle East - Treasures and Legends. The… 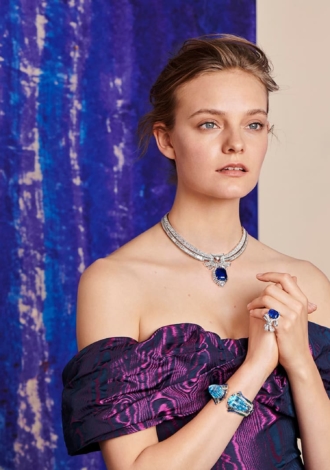 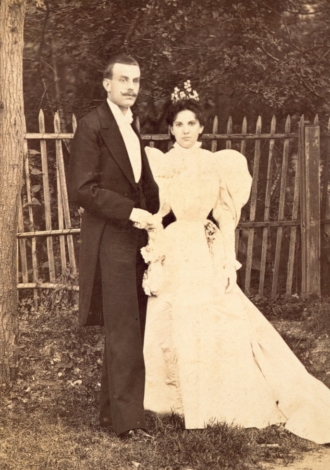 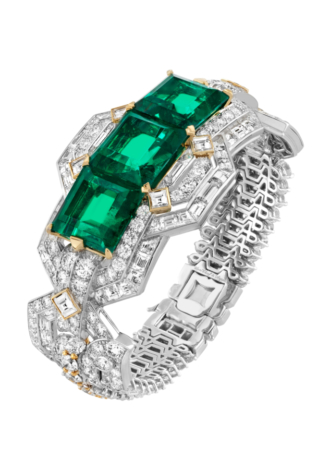 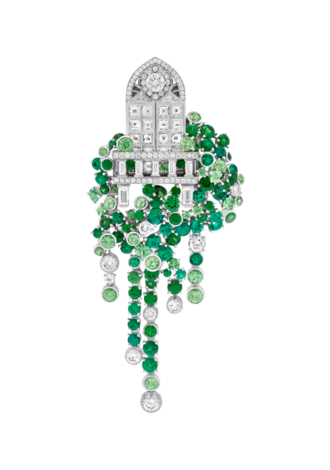 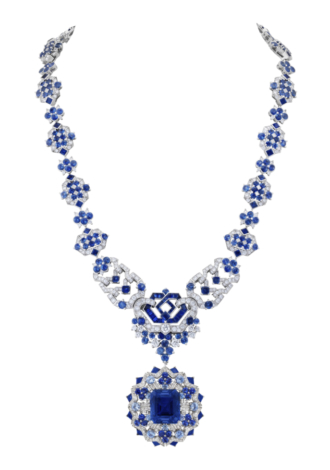 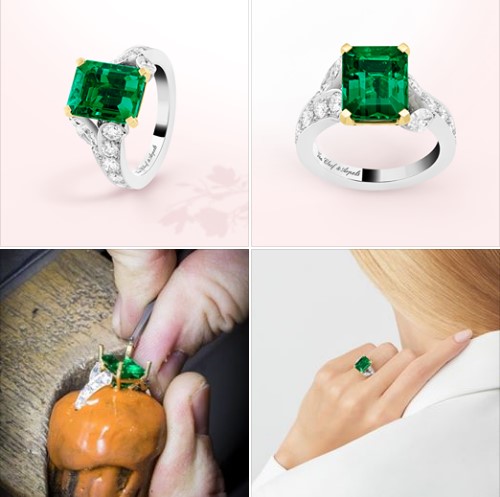 Welcome to the Maison's universe of love and devotion

The Jasmin solitaire combines round and marquise-cut paving stones. Each piece is unique, as its wearer. Swipe to discover the handcrafted work behind this piece. #VCAengagement #… 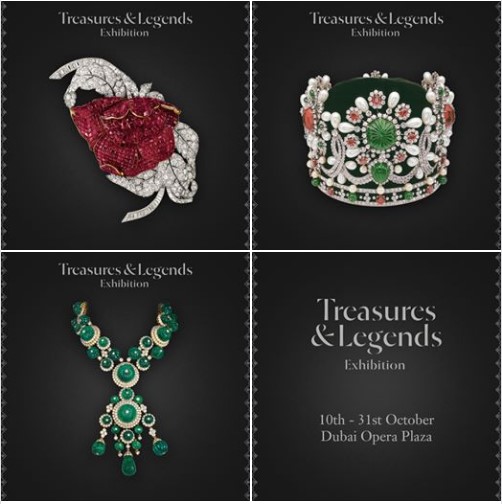 Dive into High Jewelry treasures belonging to icons of the past, at Les Salons Van Cleef & Arpels Dubai Opera from 10-31 October. #VCAexhibition #… 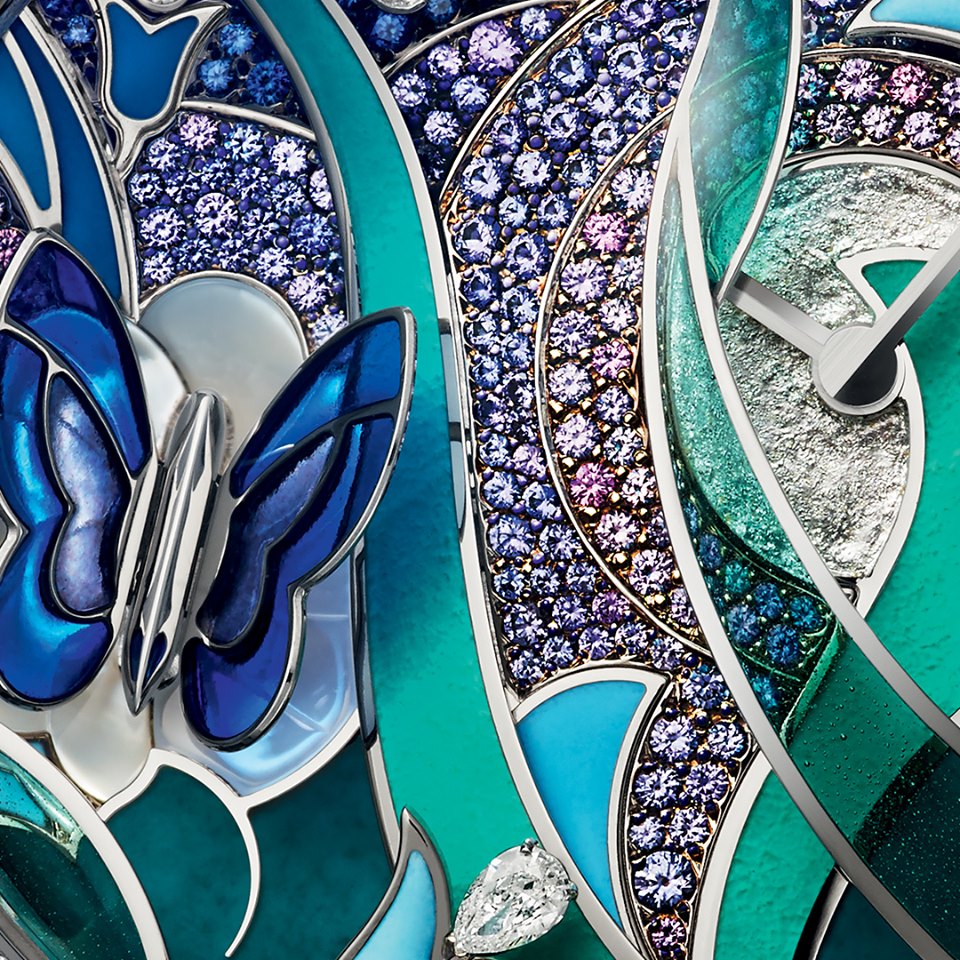 Take a closer look at the miniature tableau of the Lady Arpels Papillon Automate watch, where the moon's reflection in calm water is set with blue, mauve and violet sapphires. #PoetryofTime #VCApapillonautomate… 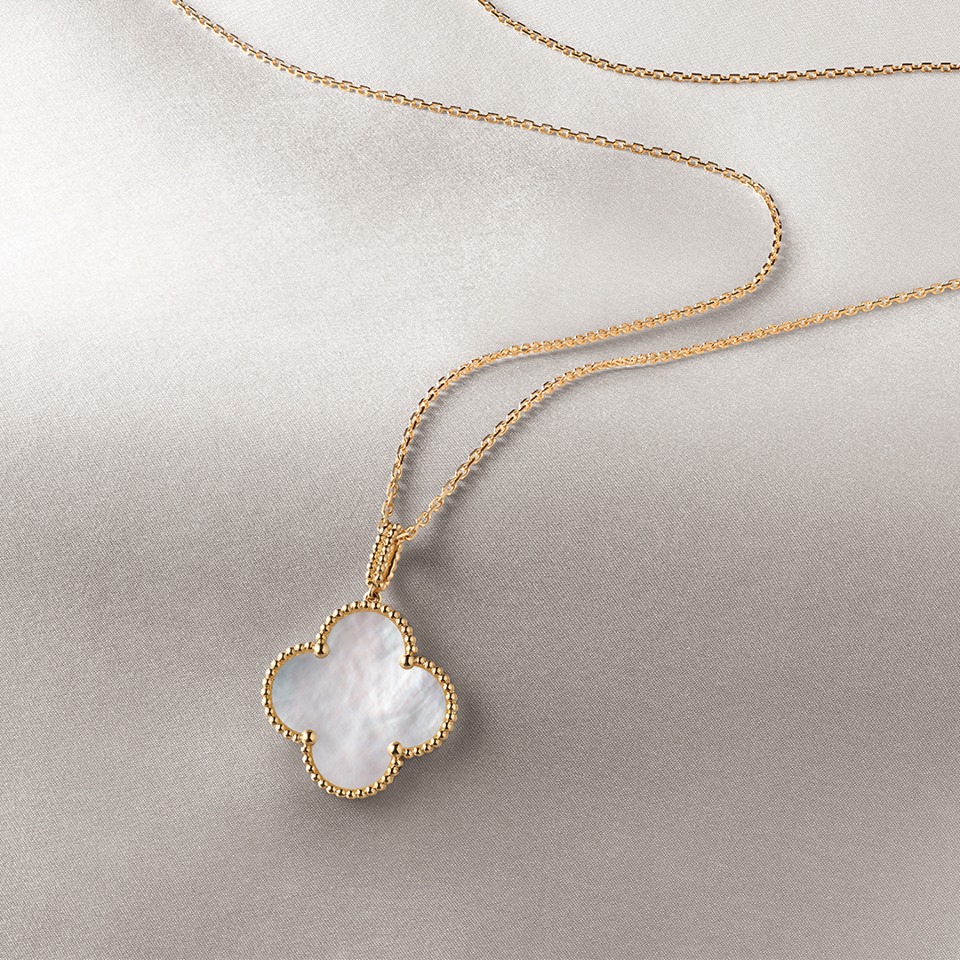 Effortlessy transformable, the one-motif long necklace has established itself as a modern signature of the Maison. Discover the Magic Alhambra long necklace and its iconic oversized motif. #VCAalhambra #VanCleefArpels http://ow.ly/B63D50wGmTq…